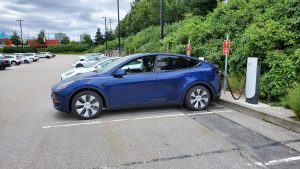 Mid 2020, the company service vehicle was switched to an EV for improving the response time, reducing the operating costs, and taking care of the environment.

I first did a test drive with a Tesla Model 3 in August 2018. I called them in Downtown Vancouver and managed to schedule a test drive. I was with my two sons. My better half was unable to attend, unfortunately.

I drove a little through downtown Vancouver, and I was enchanted. At that time I started to be interested in Tesla as a work vehicle, and I wanted to see how big the trunk was, if I could carry my tool kits, etc. It was the Model 3. I specified to the Tesla representative who accompanied us to the test that I was interested in buying or leasing a Tesla after I finished the lease contract from Honda CRV that I had then.

I was reading good and bad about Tesla, so I started watching Bloomberg TV to find out what was happening with the company, but I’m not good at the stock market, stocks, etc., So not much help from this.

I did another test drive at the March 2019 Vancouver Auto Show with two models 3’s, one ‘normal’ and the second the ‘Performance’ one! The acceleration of the Performance model is dizzying! I had to grab the steering wheel pretty tight, the acceleration from 0 to 100 km/h takes 3.3s!

The next step was to rent a Model 3 for a day. It was a cold November Sunday in 2019, temperature outside was 3-4°C. We all went (with my in-laws) to a water polo game my daughter had in the morning, then we visited the Aquarium. I didn’t record the mileage of the car, but I realized that the range is substantially lower when it’s cold outside. What attracted me again was the strong acceleration of the car. And it was just the basic model. Later that day I went to a Supercharger, to see how the charging at 400 volts DC is working. Pretty fast!

After the one day test, the feedback from the family members was that the Model 3 is on the small side if you want to transport five people. Luckily, the Model Y had already been announced in March 2019. Production was slated to begin sometimes in 2020. It started, but the pandemic had already begun.

At the beginning of June 2020, I put the down payment for the Tesla Model Y, thinking that it will take a few months for the car to arrive. Big surprise, after three and a half weeks, on June 28, we were the happy owners of the Model Y Dual Motor, Long Range.

Total range is 520 km, but realistically is close to 450 km. If the battery is charged 100%. But the system is set up to charge no more then 85-90% to prevent overheating and battery degradation. If I need to make a long trip, I can charge the battery 100%. My longest trip until now was to Whistler and back, without recharging in Squamish. Got back home with 80 km of range.
The range decreases in the winter. Some days I charge daily, even if the battery is half full. To make sure I can drive the next day. Doesn’t hurt to charge daily. Even Tesla manual recommends it. The battery is happy if it’s between 50 to 90%.

Charging is done at home, usually after midnight. Takes one hour to add 42km of range. I plug it in two to three times a week, more often in the cold season. Usually it takes 5-6 hours of charging to have a ‘full’ battery (meaning 85-90%) next morning. Yes, it requires a bit more planning, but I never got stranded. The Supercharger network is growing, so the range anxiety was never a problem.

The interior of the car may be simplistic but the screen interface is thorough, I get more usage from it than the multitude of little screen and the tons of button and switches from a regular car. Also the interface and functionality is slightly improving with each update (for example, the addition of Pedestrian Warning System was done OTA)

Not going back to an ICE car.